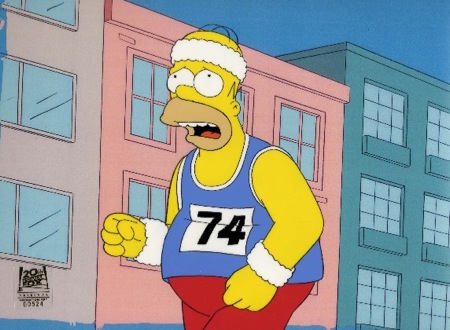 I recently did a “run” with about 20,000 of my closest friends. I thought I’d hop in and have fun, enjoy the scenery, then call it a day. Now, I’m using the term “run” instead of run because the temperatures that descended upon the pack that day did not allow for too much running. The temperature at the finish line was close to 90 degrees – a completely dangerous situation for people who thought they were going to run that day.

Basically, a pleasant jaunt turned into a 15 mile survival strategy. Luckily, my Red Cross First Aid training – coupled with my MacGyver-like survival skills – helped me avoid becoming one of the 2,000+ people that sought medical treatment that day.

Issue #1: Heat
Now one wouldn’t tend to think that they could get COLD when it’s in the 80s. However, that’s exactly what happened to me. I started to get goosebumps, I started shivering, and I actually felt COLD. My Red Cross training threw up a HUGE red flag and I remembered that these are symptoms of heat exhaustion. I immediately stopped myself under a tree and sat out until I felt a little better. However, that episode took so much out of me, that getting to my meeting spot was difficult and I had to stay hyper-concious of what my body was telling me. I had to take precautions to keep my core temperature down, so I dramatically slowed my pace, found some ice to put on my neck, and stopped pushing myself.

When it’s warm outside, you need to be sure that you’re staying adequately hydrated. However, during warmer days, slower runners completing long distances are at risk of over-hydrating because they’re exposed to the harsh elements for long periods of time and tend to drink more than their body needs. I realized that I was sucking down way too much water. I actually THREW AWAY my water bottle to prevent over-hydration. Sounds completely counter-intuitive, but over-hydration – or hyponatremia – is dangerous and can result in serious bodily damage.

Down the road, I found a small child holding a bag of ice. He became my best friend – for three seconds. I grabbed the bag and started slowly sucking on ice cubes, hoping that the small amounts of water would prevent me from consuming too much water, and that the ice cubes would help bring my core temperature down a litle bit. It was the weirdest thing I’ve ever done, but it worked. Needless to say, it only looked a little weird that after I finished my “run” I was pouring coconut water into my bag of ice and sucking it back out.

Issue #3: Clothing
I had on a loose-fitting, light colored tank top and comfortable running shorts. I also wore a hat, sunglasses and waterproof sunscreen to protect myself from the sun. Where I failed miserably is that I wore a BLACK hat (it was all I had), so needless to say, after about 5 miles, I tossed the hat to the side of the course because my head was roasting (which may have contributed to the heat exhaustion issue).

Note to self: buy a light colored hat.

As it continued to get warmer, I was really tempted to take off my tank top and run in my sports bra. However, I remembered that the more skin I had exposed to the sun, the worse off I was going to be later down the road. I kept finding neighborly people with their sprinklers running so I could get my tank top damp every so often and keep my temperature down while keeping my top on.

I’ve been running for years, but after this “run” I learned that you should never push yourself in conditions you’re not familiar with – it’s just not safe. I’m looking forward to running with a few thousand more friends this weekend…where the temperatures are expected to be much more cooperative.