This is a post written by Jackie Mitchell, Director of Marketing and Communications at the American Red Cross of Greater Chicago. Jackie was deployed to Cape Cod in advance of Earl’s forecasted sweep by the east coast. Read about her experience with helping the Red Cross be prepared for the possible storm, and how it felt to be spared a disaster. Remember, September is National Preparedness Month! 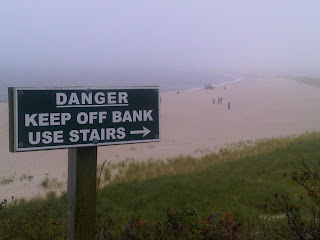 Early last week, I was looking forward to a Friday night party with friends, family and Red Cross donors and volunteers. Friday was my birthday and almost-one-year-anniversary as the Director of Marketing and Communications with the American Red Cross of Greater Chicago. I was making plans for a menu and music for the people who’ve made my 32nd year such a good one.

Meanwhile, Hurricane Earl was spinning like a sawmill blade toward the Outer Banks, and D.C.’s national headquarters (HQ) were making plans of their own.

Mid-week, I got the deployment call to go “somewhere on the eastern seaboard, probably Cape Cod” and help work with national and local media. Together, we would inform people how to prepare for the worst and help in the areas that would be hit. I would fly out first thing Thursday morning, and expect Earl to strike the Cape the evening of my birthday. Within minutes of national HQ’s call, Chicago Red Cross co-workers and volunteers began helping me prepare to deploy.

One tweeted, “Happy Birthday. I got you a Hurricane.”