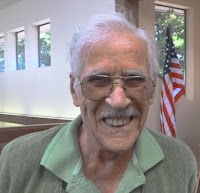 In the last 100 years, the world has seen a man walk on the moon, two world wars transpire, the formation of the United Nations and the introduction of LifeSavers candy. While these historical benchmarks are well publicized, another significant event of a “true lifesaver” deserves honor and recognition.

“Any chance I can encourage people to donate, I will,” Willard exclaimed. Even later in life, when blood donor regulations limited the upper age limit, Willard returned as a regular donor once the limitation was lifted.

Willard has successfully donated 138 units, eight of which occurred in the last 24 months. Not content to stop at 138 donations, Willard last attempted to give blood in August 2011 and will make another attempt on September 22nd in the Coos Bay area, where he’s been retired (and donating) for the last 18 years.

Willard comes from a history of gratitude and hard work, which is instrumental in his philosophy of blood donation. After retiring from the banking industry, Willard states that he “started from the bottom as a bookkeeper and worked my way up to manager.” He finished his career as bank manager at First National Bank of Oregon in Silverton, which is now a Wells Fargo.

Passing on his donation practice to those around him, Willard has instilled the habit of giving blood in his three children, including a son who has provided directed donations in Minnesota due to his rare blood type. Now that Willard is retired, he’s found friends in fellow blood donors in his retirement community. “I feel grateful that I’m healthy enough to donate. It’s been a blessing to me.”

Beyond donating blood, Willard has also made financial donations to the Red Cross after witnessing how the organization provided emergency services during disasters like earthquakes and tsunamis. Although Willard has lived an incredible life of generosity, he is humble when informed of his status as the nation’s oldest American Red Cross blood donor.

“It feels so good to be honored as a donor. I’ve never expected anything in return. You hear about people who need blood and just being able to donate is a gift enough.”