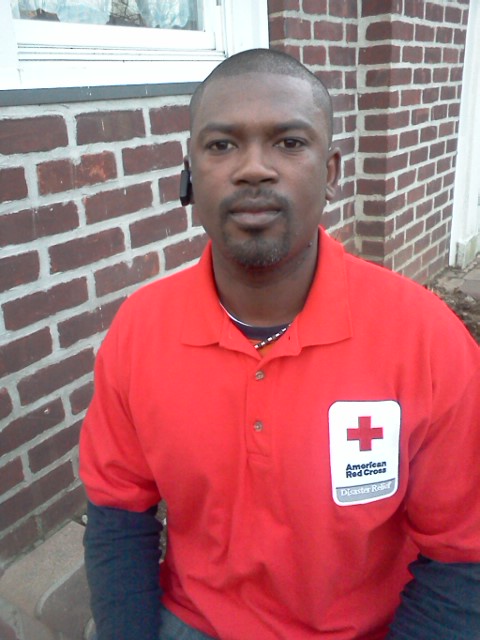 Volunteers come from many walks of life. For some, it is a chance to give back to their communities. For Francklin Morose, a volunteer with the American Red Cross on Long Island, it’s much deeper than that— as his journey began with the world literally crumbling at his feet.

Morose was at his accounting job in Port-Au-Prince, Haiti, on Jan. 12, 2010—the day of the worst earthquake in the island nation’s history.

It began with a simple shake he recalled. He and his colleagues thought a big truck had driven by.
“Then,” he said, “everything started to fall down—the walls, the ceiling.”

With all the entrances blocked, Morose and his colleagues were forced to jump to the ground from a second story bathroom window. That’s when they realized an earthquake had struck.

“The whole block was dark; everything had changed,” Morose said.

He described buildings destroyed; communications disrupted; trees down; and people who were bloodied and bruised running through the streets. He made his way home and found it destroyed.

That night, Morose located his family in a park, among hundreds of others that had lost their homes.

“There was no food, drink, nothing,” he said.

The mental toll was equally as heavy. Morose became concerned about Alexa, his six-year-old daughter. She had been at school during the quake. Although physically unscathed, she had been traumatized by the experience and screamed at every noise.

A few days later, Morose heard that the United States was allowing Haitian-American citizens who had been affected by the quake to evacuate. Because Alexa had been born in Florida, she was eligible to travel. Because she was underage, Morose was permitted to accompany her. Alexa’s mother, concerned about leaving her job, stayed behind in Haiti.

Father and daughter took a military transport plane to Orlando, Fl. At the airport, American Red Cross relief workers gave them food, toys and contact information for the Red Cross on Long Island as they would be traveling to Baldwin, N.Y., the next day; Morose planned to stay with a cousin who lived there.

Shortly after arriving on Long Island, Morose visited the Red Cross office in Mineola, and was given a stipend for winter clothing, along with information about how to apply for Social Security, food stamps and more.

“This was exactly what I needed to start,” he said.

“Red Cross gave me their friendship,” he added. “When I came to my cousin’s house, I didn’t know anyone. The Red Cross called to make sure we were okay. That’s when I decided to volunteer.”

Morose is on call two days a week as a Disaster Action Team volunteer who responds to fires and other local emergencies, helping those in need with the same kind of immediate humanitarian relief he and Alexa received from the Red Cross.

In the two years since he and Alexa arrived in the United States, they have moved from his cousin’s house to Bellerose. Morose now works as a childcare worker for children with disabilities.

He says Alexa, who attends first grade at a Queens public school, is doing better. But because she does not want to return to Haiti, they will stay in the country. Morose, who has a bachelor’s degree in business administration he earned in Haiti, plans to go to school here for a degree in finance.

Meanwhile, he says he volunteers for the American Red Cross “to help other people as they helped me.”

He added, “I would like to thank everyone who contributes to make the Red Cross what it is. Without the Red Cross, we would have been lost.”