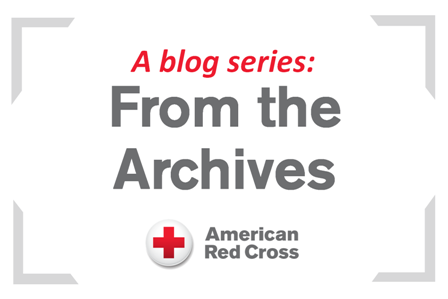 Red Cross service delivery during the holiday season has a special place in our history. Our archives team put together a few instances that really stand out, including Operation Snowbound and one Donut Dolly’s experience in the Vietnam jungle.

There were few bright moments during wartime, so Red Cross recreational workers such as Shirley Atkins did all they could to bring the holiday spirit to the troops.

Hear her tell her story:

Shirley was a program director with the Red Cross in Vietnam from 1971 to 1972. For the holidays, the recreational worker teams organized decorating parties and caroling groups, passed out ditty bags and traveled to many outlying units to reach additional servicemen.

At Cam Ranh Bay, Atkins discovered that the Air Force had a unique way to announce the arrival of the Red Cross workers to the servicemen in the field: A plane painted with a Santa face flew over the jungle and played Christmas carols. Atkins could not pass up the chance to hitch a ride on one of these flights and said that “it was one of the best things that I can ever remember in Vietnam.”

Today, the Red Cross still continues this fine tradition of bringing cheer to the troops. In this photo from 2008, Red Cross workers and volunteers visited patients at Walter Reed Army Medical Center in the Washington, D.C. area to fill the halls with holiday carols.

The Great Blizzard covered Nebraska, Wyoming, and North and South Dakota with a series of snowstorms that began before Thanksgiving 1948 and continued past New Year’s 1949. Sundance, Wyoming received more than 100 inches of snow, and snow drifts of 25 to 30 feet were common in Nebraska.

By late January the accumulation was so great that a disaster area was declared and Operation Snowbound began. This multi-force relief effort involved the Fifth Army Division, the Red Cross and the Civil Air Patrol (CAP), among others. Normal transportation was impossible; snow drifts covered even entire locomotive trains. With the assistance of the CAP, the Red Cross flew 261 missions in small, light airplanes that could land on snow drifts to deliver food and medical supplies to stranded communities. Even last year, over Christmas and New Year, historic flooding struck many communities along the Meramec and other rivers in Missouri. The Red Cross provided essential disaster relief, such as shelter and hot meals, to families affected by this holiday disaster.

In the past, Red Cross Youth clubs in schools across the country have brightened holiday meal times for many hospital patients. Shown below are students from Stowe Township Junior-Senior High School in Western Pennsylvania in 1963, decorating placemats and creating tray favors with holiday themes. That holiday season, 1,000 hand-drawn placemats were sent to veterans and mental hospitals.

Whether tending to military personnel far from home or caring for disaster victims in an emergency shelter, Red Cross volunteers and staff bring the spirit of holiday joy to their work throughout the season.