For most of us, the word brings to mind those who give their whole selves to serving others. These kind, generous, selfless individuals immerse themselves in a particular cause or charity, and from our living room couch we read about how they feed and clothe the poor, house the homeless, care for the sick and injured, and raise money to support community nonprofit organizations. And we feel like we aren’t doing enough. 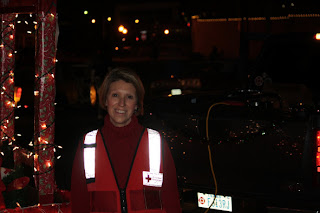 I have always wanted to be an American Red Cross Disaster Volunteer. Yes, Disaster Volunteer (DV) should be capitalized, because it’s a title. A sought-after, hard-earned title given to those who commit themselves to and train for the tremendous responsibilities that come with the job. But I simply can’t, because of where I am in my life, become a DV. Local Disaster Volunteers are called out in the middle of the night and national Disaster Volunteers are deployed for two or three weeks at a time to provide canteen services to first responders and shelter, food, clothing, and mental and emotional support to those affected by natural and manmade disasters. I have two young children and a husband who works 60-80 hour work weeks; there’s no way I could leave my house in the middle of the night, let alone leave my family for weeks. Maybe someday, but not right now.

I know a lot of men and women in situations similar to mine. Caring for our children and our spouses and our parents and ourselves takes more hours than they are in the day and more energy than we have to expend. It would be so, so easy to leave the volunteering to “someone else”. To someone with more time, more energy, fewer children, older children, healthy parents, an easier job, less stress.

But here’s the thing… In my experience, the people whose calendars already overflow with family and work responsibilities and commitments are usually the same people who volunteer. They may not take on the role of Disaster Volunteer, but they’re still out there, making a difference.

A friend of mine cares for and trains Diabetes Alert Dogs. Another friend of mine handles public relations when teams of local Disaster Volunteers are deployed in her community. Friends of mine run the PTO, coach youth soccer and baseball teams, and teach art to underprivileged children. Friends of mine chaperone school field trips, help out in the classroom, and raise money for local service organizations, schools, and hospitals. All on top of their full-time jobs both outside and within their homes.

Volunteering is the ultimate exercise in democracy. You vote in elections once a year, but when you volunteer, you vote every day about the kind of community you want to live in. ~ Anonymous